Hoveton Great Broad has had an interesting history, not just on its own, but as part of the bigger cultural, landscape, geographical and industrial story of the East of England.

Light woodland cover in Norfolk and Suffolk, coupled with waves of invasions by Romans, Saxons and Danes meant that woodland clearance was rapid, to provide building material and fuel, as well as agricultural land. As natural wood supplies were reduced, so the need to find alternative energy supplies were increased, and peat provided a convenient local solution as a fuel

Peat digging was probably introduced by Viking invaders from about the 8th century, and the main diggings, which today form the Broads, took place sometime between the 8th and 12th centuries.

But as with all things, Nature will eventually overtake human plans… With huge excavations all over east Norfolk, as sea levels rose it was inevitable that where there had once been holes, now there was water, and it must have become increasingly difficult to keep the excavations, some of them as much as 6 metres deep, dry, but with rising populations the need for peat fuel  continued with shallow diggings being created as late as 1880, the last just north of Hoveton Great Broad.

The diggings are now known to cover over 303 sq kilometres, although many of them have since filled in and are covered by fens and wet woodland, some of it floating.

With an ever-growing population the wetlands formed an essential part of the local economy. Fish and wildfowl provided food, while the fens were mown to provide thatching materials for houses and hay as feed and bedding for animals. Many areas were drained during the 17th and 18th centuries, giving the wide expanses of grazing marshes we see today.

As rivers and excavations joined, new opportunities to make use of these waterways arrived.  Connecting many parts of the county, rivers and these new water bodies, known as “broads”, now became essential routes for commerce, and communication.  Communities, businesses and cultures benefited from this network of waterways from 16th century.

During the 19th and 20th centuries, country life changed; as farming became more mechanised and more people left to live in towns and cities, the need for fen crops, which by cutting had produced an almost treeless landscape, disappeared and many of the fens became covered by the wet woodlands we see and value today, most of which are less than 100 years old.

Along with the lack of demand for fen products, the advent of motorised transport and an increased road system led to a decline in the commercial use of these rivers and broads and a more peaceful rural mood settled over the area now known as the Norfolk Broads, as it gradually become valued as a wildlife and holiday area.

The mystery is that somehow this whole historical episode somehow got lost!  A collective loss of memory hid the history of the broads for 100’s of years and the very creation of the broads and the waterways that connect them was just thought to be a “natural” feature of the landscape all the way up to the 1950’s.  It was only in 1960  that Dr Joyce Lambert and Joseph Jennings published their historical and practical research across the broads which came to the conclusion that the broads couldn’t be natural, because the sides were vertical, not sloped as they would be in a naturally occurring lake or water body. Lambert also found the remains of straight uncut peat “baulks”, left behind during the cutting.  This was confirmed by medieval records of peat cutting.

20th Century changes also affected the broads and rivers, and the dykes which had been dug for drainage and transport also changed, as pollutants for sewage and run-off from fields destroyed the rich water plant and animal communities. Algal blooms filled them with soft sediment and a gloomy state of affairs was summed up by the Nature Conservancy in a 1965 report, which eventually led to the formation of the Broads Authority in 1978. After much research into the problems, action by water companies and farming to reduce inputs and the restoration efforts began and continue today.

The History of the publics affection for the Great  Outdoors

During the years following the 1st World war and reaching into the 1970’s the environment and politics surrounding environmental issues grew in public interest.  There has been much research and discussion in modern times to unearth the starting point of this rise in interest, but no one thing has been determined as the catalyst.  Maybe it was the desecration of cities during the war, the need for more wholesome activities, or the need to just feel at one with nature that guided the public and political psyche.  Whatever the starting point, phrases such as “quality of life”, the word “environmental” and a general understanding that beyond the supply of essential services, the public wanted and needed more….

The public mood was one that wanted to bring about change.  Across the nation groups worked together to highlight their wish to have access to nature.

Demonstrations in the UK included the mass march on Kinder Scout in 1932, when 500 walkers got on their boots and walked from Hayfield to Kinder Scout, and in doing so secured the rights of the public to open spaces forever.  In 1935 the Ramblers Association was officially created and continues to this day to work to promote the rights of walkers across the country.  Throughout the 1940’s legislation surrounding the environment came into effect and in 1949 the government passed the National Parks and Access to the Countryside Act, “to preserve and enhance their natural beauty and provide recreational opportunities for the public”. In the same year “Nature Conservancy” was established by Royal Charter to manage sites of scientific interest.

Hoveton also featured in this surge of public interest in the great outdoors. Hoveton Great Broad and Hoveton Little Broad (also known Black Horse Broad), was shut off from the River Bure at some point in the 19th century, as many landowners made use of the then named “Inclosures Act” to secure rights to land.  Across the broads several bodies of water were sealed off from public access, and as riverways that had been considered part of the “King’s River”, and therefore open to all, these actions prompted discourse across the broads villages and boating community.  In 1949 Herbert Woods, a local boat builder led a campaign to gain access to Hoveton Little Broad.  The trespassers demolished the barriers to the broad and subsequently negotiated public access at specific times of year from then on.

Interest in the environment and its effects on people’s quality of life continue to appear with the passing of the Clean Air act in 1956, as a reaction to the killer smog of 1952 and the increasing industrialisation of cities across the country.

Throughout the 1950’s, 60’s and in to the 1970’s the wish to physically access the environment, and the rise of access through mainstream media continued to add to a growing thirst for knowledge and understanding of the natural world. (Sir David Attenborough’s “Zoo Quest” was first aired in 1954 and continued until 1964.) “Survival” was first aired in 1961, created by Anglia TV, the nature documentary series ran for over 40 years and produced over 900 episodes. Underwater explorer Jacques Cousteau made his first pilot documentary in 1966 and was then commissioned for a further decade, creating 36 documentaries that have been aired across the globe.

By the late 1960’s the “environment” had become a recognised subject of public policy and led to the creation of the Department of the Environment in 1970.

During this time Hoveton Great Broad and the surrounding spits of land were making their own history. 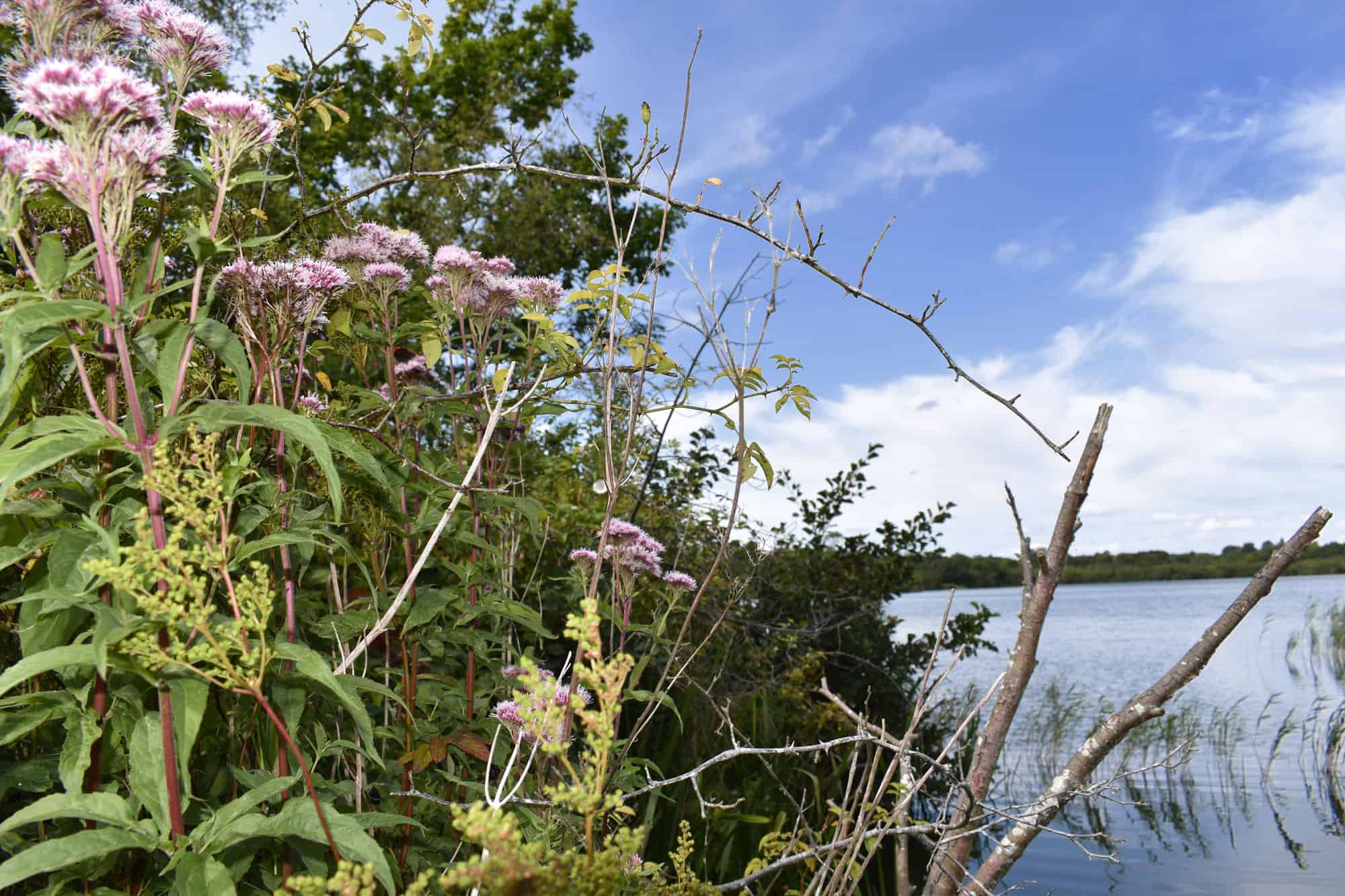 With the broad cut off from public access and fen management stopping, the surrounding alder woodlands grew and flourished, and fish took advantage of still waters and nooks around the broad perfect for spawning.  At the time the broad was only visited by estate staff and the landowners for the majority of the year.  Once a year the public were allowed access for a week to enjoy fishing and fresh air.  The broad was still pretty clear, but the effects of reduced water quality had already started to gather momentum, aquatic plants poked through the still waters and provided nesting and alighting points for many species of birds and insects…. but varieties had started to decline.

The broad was ailing but hadn’t yet reached the poor state it did by the mid-1970s, and the local staff of the Nature Conservancy occasionally stopped by to monitor the site. Eventually with recognition of the site’s environmental importance as a Site of Special Scientific Interest a formal agreement between the Nature Conservancy Council and the landowner was signed  in 1958 and the Broad, with the wet woods and marshes around it, became part of the larger Bure Marshes National Nature Reserve in 1958, managed by the Nature Conservancy and its successors.

It was during this time, on one of his regular inspection along the River Bure thar Dr Martin George came across the site, he climbed up from his boat and meandered through the dense jungle-like alder woodland and soon discovered a patch of “maiden” alder carr, a rare thing within the broads, untouched by man and never coppiced or cut. As he continued his walk, he came to a stunning vista overlooking Hoveton Great Broad.  The sight inspired him, and he decided that this was something the public had to see.

We are unsure of how long it took Dr George… but his absolute fascination with the site, and his determination to share the beauty of Hoveton drove him to seek permission for and create the Hoveton Great Broad Nature Trail.  With such dense vegetation and a wish to preserve as much as possible, NCC staff built a small pull along “cart” that could carry two railway sleepers at a time.  Using this home-made piece of kit, they slowly set about the task of building the nature trail’s path, two sleepers at a time, looking for the path of least resistance through the wet woodland so as to disturb as little as possible.  In 1969 the Trail was completed and opened to the public, the Broads now having become busy again with boaters and holidaymakers.

This is now known to be one of the oldest nature trails in England.  It, along with the Broad, is part of the Bure Marshes National Nature Reserve, itself part of a larger Site of Special Scientific Interest (SSSI). In turn, this is one of 27 SSSIs which make up The Broads Special Area of Conservation (SAC), Broadland Special Protected Area (SPA) and Ramsar world-wide wetland convention site, and indication of the national and international importance of the area.

The History of Natures Guardianship….

The Nature Conservancy has been through numerous re iterations, becoming the Nature Conservancy Council in 1973, with the remit to care for National Nature Reserves and other conservation areas, then remodelled again in 1991 after the creation of the Environmental Protection Act in 1990. The NCC was then divided into three, to reflect the nations of the UK with separate commissions for Scotland, Wales and England. The remaining English constituent became English Nature and to ensure consistency in approach from all three new bodies the Joint Nature Conservation Committee was set up.

English Nature, funded by DEFRA, was again re-modelled and in 2006 became Natural England.